I’ve been painting using watercolor as my primary medium since the late 1980’s.  Lately I’ve had this deep desire to try oil painting.  Now I’ve painted a few oil paintings over the years but I’ve not done enough of them to become a true proficient.  What’s more the oil painting process is very different from how one might approach a watercolor and so I began poking around on Instagram and found a few people whose work in oils I find immensely inspiring – Mark Boedges, Devin Michael Roberts and T. Allen Lawson (and more).  I have been following these painters and observing their work.  I’m a visual person and so I  learn a great deal just by seeing their work and sometimes they share short videos and I might watch them a few times.  And with that the seed was planted and all I needed to do was start. 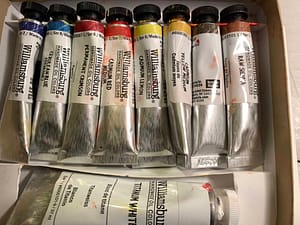 I’d received a sample set of oil paints from Williamsburg Oils a while ago and they have been sitting on the sidelines waiting for me.  I’m not sure why the I have been delayed in opening the tubes but I can only surmise that I was a little afraid.  But the desire to try oils began to grow and then became so strong that one day in mid November I began.  I squeezed out a little paint – not too much so as not to be wasteful – and began to paint.

I’d decided to start with an autumn scene because it is a subject I have found difficult to paint using watercolor. I was ready and excited… and so it began.  I can say that I don’t know for sure how to approach oil painting but I’ve watched a few videos and it seems that some people start with a tinted canvas and some don’t.  I decided to start this painting with a tinted canvas and I used the Raw Sienna that came in my Williamsburg set.  I would say next time I will use Burnt Sienna, Burnt Umber or Ultramarine Blue depending upon the subject I will be painting.  So already I’ve learned just a little and that makes me very happy.  The canvas I used is a 5 x 7 Gessobord by Ampersand.  It is a small format and smooth.  I’ve used canvases in the past and am not sure about the texture that the canvas creates and so this time I wanted a smooth service where I could control more of the texture.

And after I gave the canvas a quick tint with raw sienna I began to paint.  Alla Prima (wet on wet) I began until I needed to stop and let the whole thing dry.  At first it was difficult, different and then once I settled into the feel of the paint, the blending and buttery, creamy texture I began to feel just plain joyful!  I relaxed into the process and began to allow myself this time of exploration for the pure joy of it.  It was so freeing in comparison to my watercolor experience.  I still enjoy watercolor in all it’s unpredictability but these oils…. I fell in love immediately. 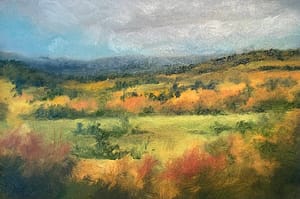 Here is my very beginning – the alla prima phase – and here I just laid in my general color scheme not really paying attention to the details but just trying to establish the value pattern (my pattern of darks and lights).  It was a start and I was hooked and I would work on this little painting on and off for about a month.  Not everyday because sometimes I would need to let the paint dry a bit but I worked on it regularly and finally it was finished.

So now I am getting read to start another but before that I need to finish some canvases I started long ago that remain unfinished and I will bring with me what I learned so far.

My pastor said in a recent sermon that it takes 10,000 hours to become a master… and so my journey has begun… the journey toward mastery.  Now mastery doesn’t mean every painting will be a masterpiece but mastery means I will gain knowledge, proficiency and ability.  I am ready for the journey. 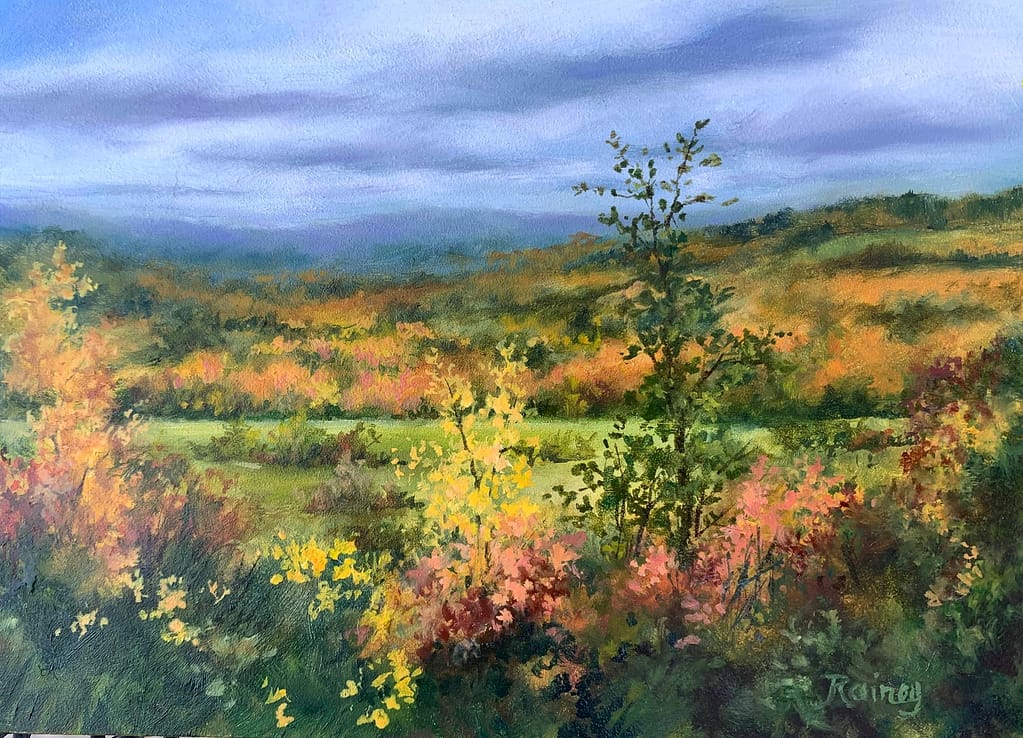 “Peak” Oil on Primed Board