I’ve been getting a few things done around the house in preparation for my upcoming “changes.”  For several projects I engaged an expert.  The project of top priority was replacing the front walkway.  The walkway – while pretty – was difficult to navigate and difficult to shovel or snow blow when the snow falls here in Upstate New York.  In a word (or two words) the front walkway was generally hazardous.  The photo you see above is the rocks that were pulled from the front walkway and nicely moved by my “engaged expert” to my fenced garden area where I hoped to use them for a garden path.  The garden path will be used primarily by me and my cat Luvy and so “generally hazardous” is okay for us.  So around the end of May I began setting the rocks in place.  Piecing the walkway together like a jigsaw puzzle.  Some of those suckers must have weighed a thousand pounds an exaggeration to be sure but they were dang heavy.  But bit-by-bit I excavated, dug, chopped, hauled and placed each rock in precisely the perfect spot or at least an adequate spot.  Either way they won’t be moved by me again any time soon. 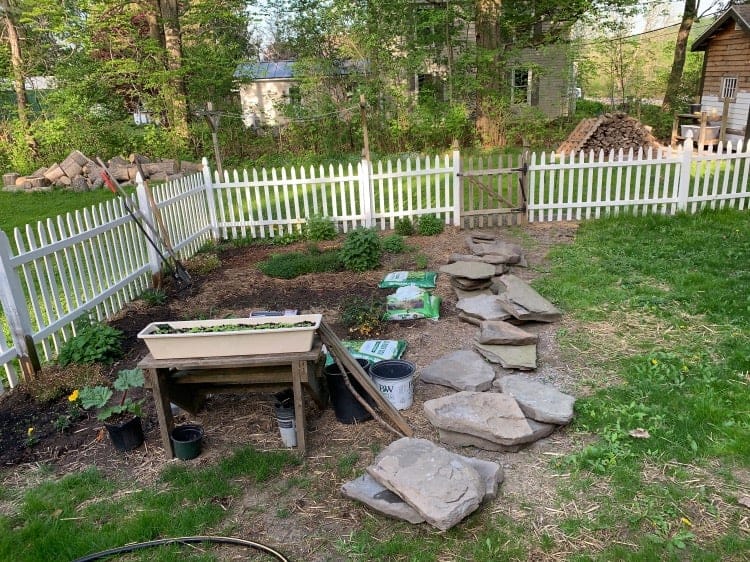 At first the project seemed a bit overwhelming but I tried to do a little bit every few days and now nearly 2 months later It’s almost done.  As I look at the photos I am reminded that the next project in the hopper is finishing my half-done painting – namely the shed and the fence.  But that’s okay.  I like nesting and working around my home.  It’s my zen and a way to move my body, which sits at a desk most of the day.  I’m hoping my upcoming changes will give me the space to do more of what I love to do and more of the things I know I need to do – like moving this body on a regular basis.  Until then I’ll just tackle each project and keep at it till done.

There are times during my creative journey that things seem to stagnate.  What I usually do is walk away or change from graphite to watercolor or from watercolor to oils.  That strategy does work most of the time but this time I decided to try something else. I remember years ago I used charcoal pencils […]

I finally went back to church after many weeks away.  Honestly, I’ve always been very inconsistent when it comes to my attendance at church and things have gotten especially worse since Covid.  But I went and was so happy to see everyone and hear God’s Word.  The church is still live streaming and so in-church […]